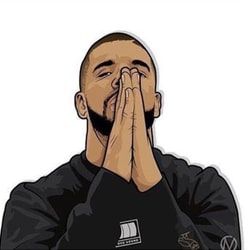 "First of All' is a free Drake type beat 2021 that reminds of the sounds Drake loves to freestyle to.

"Be" is a Drake dancehall type beat with some Afro vibes as well.

This is the type of instrumental that can turn into a song people love to dance to.

The track has a very commercial vibe so it's possibly a great pick for a single.

"I Got U" is a Drake type beat with hook.

It has a very smooth rnb rap type of vibe and the chorus vocal is supercatchy.

In addition, the melodies are no less than infectious.

If you need a single, this Drake type beat instrumental might be just the one for you!

Nevertheless, we won't charge you for it.

you can download this free type beat (good for non-profit use) using the link below.

Subscribe now!
Don't miss a beat instrumental of ours ever!

About Our Drake Style Beats

Ever since Drake hit the music industry in 2009 with his breakthrough singles such as "Best I Ever Had" and "Succesful" he's the top artist in rap. With his sophomore debut album "Thank Me Later" he further solidified this notion with a variety of dope beats and superstar features.

So what are his keys to success in music?

First of all, it seems that Drake has a style of his own.

After all these years at the top, he somehow still manages to increase his relevancy and popularity hit after hit.

Secondly, we think that one of Drake's secrets to his success can be greatly attributed to his variety of styles and creativity in his beats and instrumentals.

For instance, he does basically every genre from Trap to Pop to RnB he and continues to dominate the charts.

Paying Attention To The Latest Sound Of Beats

We recognize Drake's musical success factors and we take extra effort to deliver that part of the formula on the (instrumental) production side.

For example, we pay tediously close attention to Drake's beats and type instrumentals.

Moreover, we keep an eye on how his Drake's sound develops over time.

First of all, our team of Grammy nominated multi platinum producers provide small and big artists alike with the same quality of beats and instrumentals.

Possibly, tracks which Drake himself would take pride in using.

Namely, but drawing inpiration for beats from his more recent hits such as "Gods Plan" and "In My Feelings" as well. So yes, we make sure we're on top of the latest vibes while we apply his signature blend of smooth, atmospheric R&B and mix it with moody Trap undertones that Drake is known for.

Lastly, we're more than confident that our Drake type beats and Drake type instrumentals will cover all bases and deliver exactly what you're looking for as an artist making a name in the music industry.

So browse through our Drake type beat instrumental tracks and take advantage of our professional sound.

Finally, all instrumental beats are professionaly produced after one of the biggest superstars in music history.